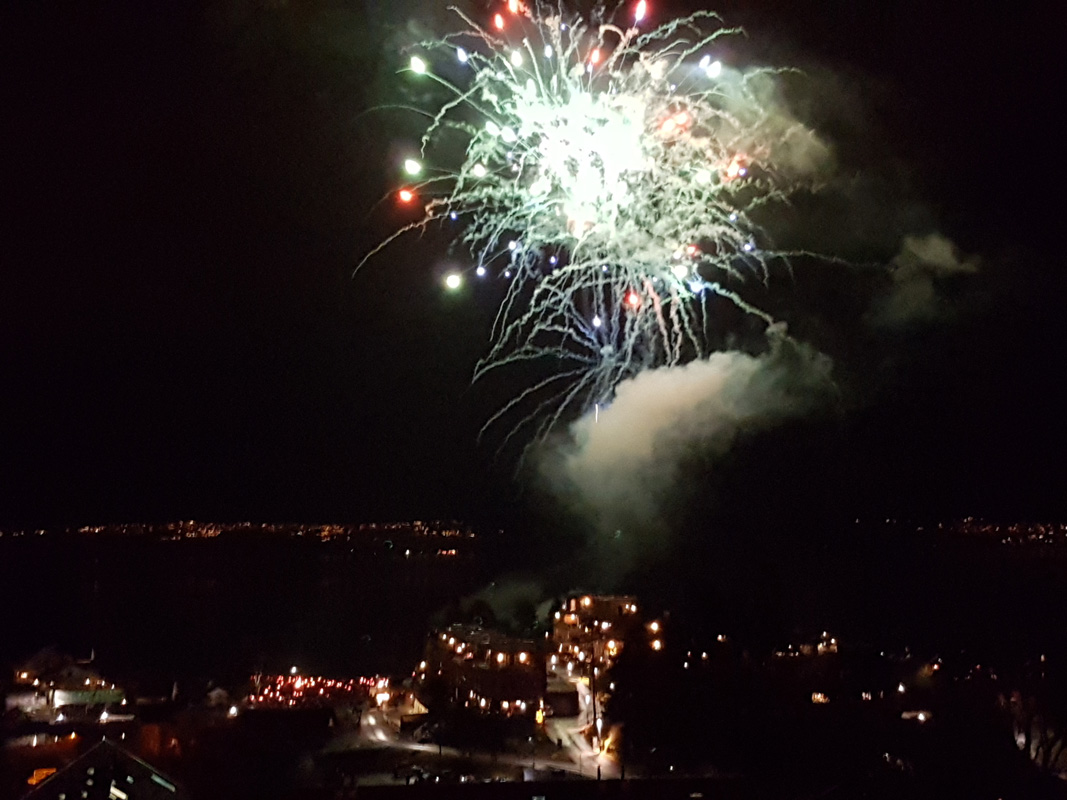 Just before midnight on New Year’s Eve the first private firework displays light up the skies all over Norway.  In Vollen the fireworks are magnificient and often last until the end of the first half hour into the New Year.

This photo was taken from Vollen skog, looking down on the village, with Oslo in the distance at the end of the fjord.

Remember that on New Year’s Eve, grocery shops and the state wine monopoly shop close early, usually about 3 p.m.  Shops are also closed on the 1st of January.  The closest wine monopoly shop is in Slemmestad, 3 km to the south of Vollen. 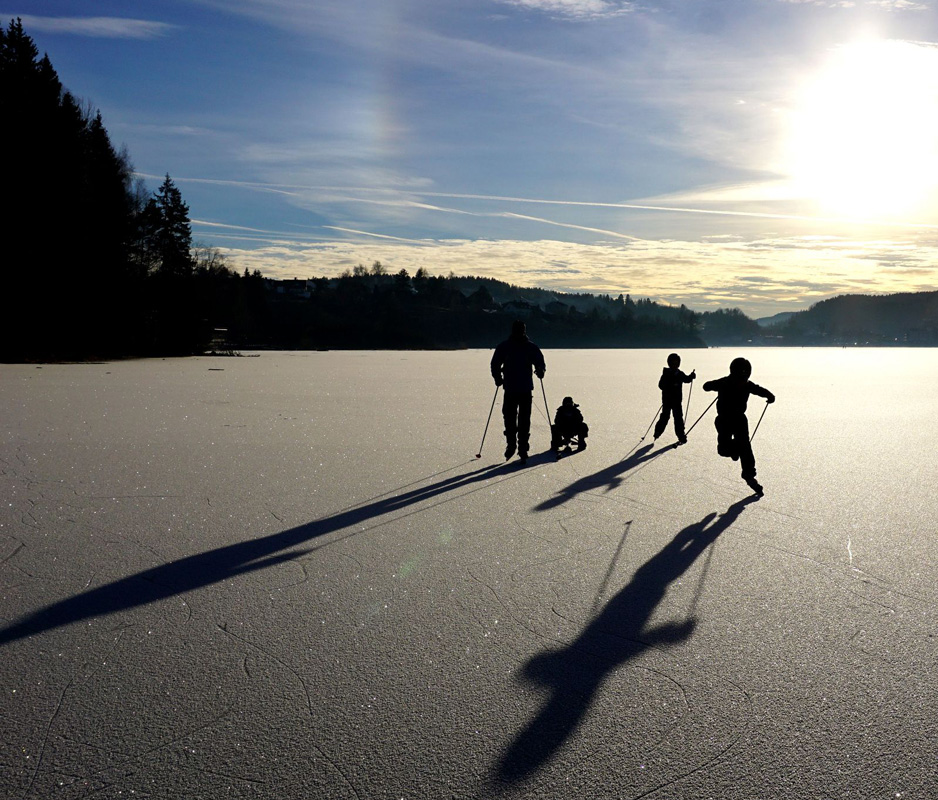 Snow and Ice Conditions in January

Some years there is little snow in January, but cold weather with thermometers, especially at night, showing several degrees of frost.  This means that lakes freeze over and are certified safe for skating.  One such lake is Gjellum at Heggedal, just five minutes by car from Vollen.  On Gjellum lake it is often possible to skate for five kilometers towards Asker.  On the picture you see boys skating with ski-poles to provide extra speed and balance!  The youngest is having a rest on a sleigh pulled by father on skates.

For those who don’t skate, it is also possible to walk on the ice, using “brodder” – the spiked fitment for boot-soles.  You can buy these in Vollen apotek – the local chemist shop. 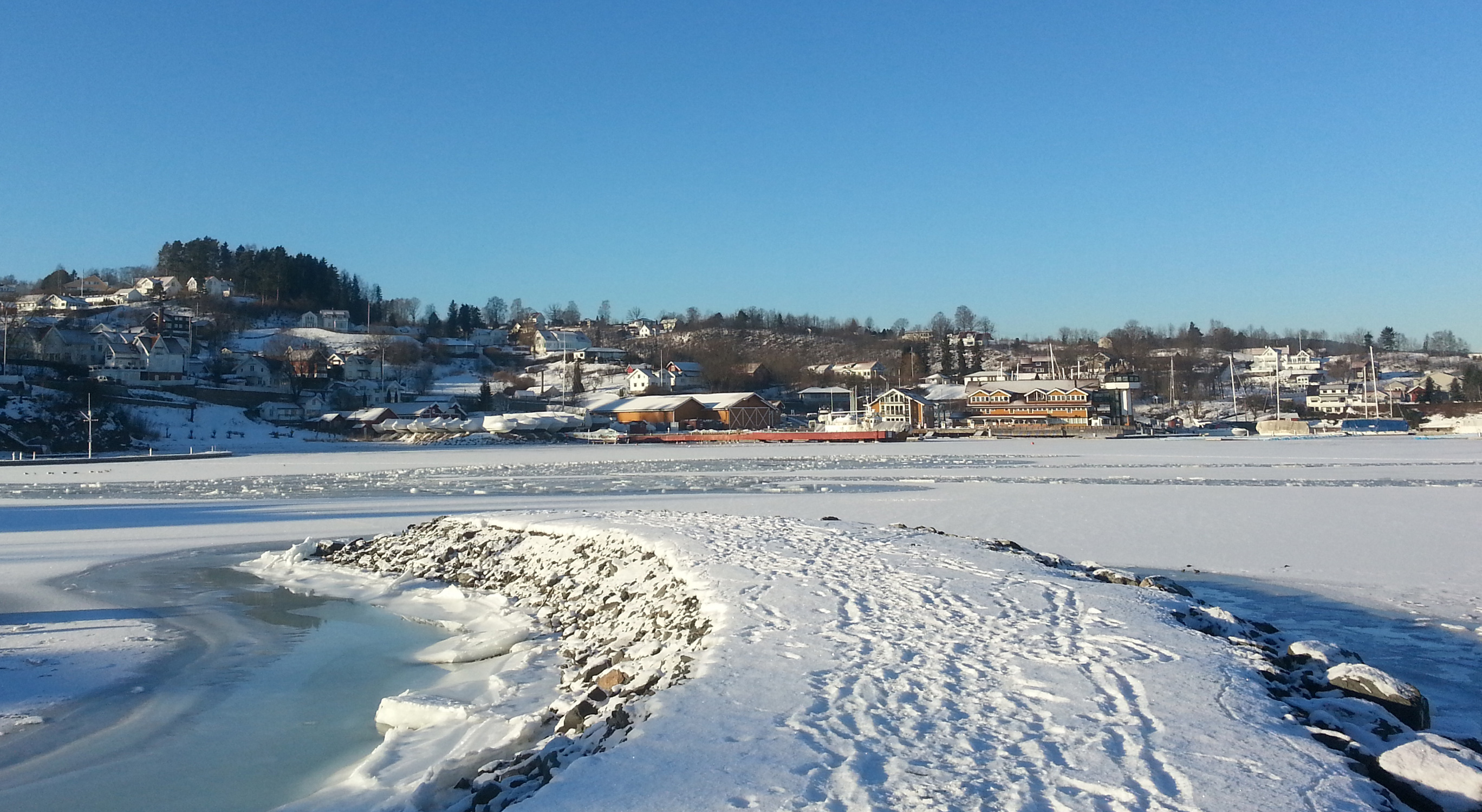 If the Oslo Fjord Freezes over

This picture was taken in late January from near the landing stage for the ferry boat to Oslo.  Usually in February and the first half of March, but sometimes earlier, parts of the fjord freezes over.  It is then possible to walk, ski or (if not covered by snow) skate on the fjord – although always important to follow the safe marked paths.

If and when the fjord freezes over, the Oslo ferry boat to and from Vollen cannot sail.  So during these weeks traveling to Oslo means taking the bus or driving.

Ice Fishing on  the Fjord

When passing Leangbukta – on your way to Oslo by bus or car – you can often see fishermen sitting by the holes they have bored through the ice.  Winter cod fish is particularly good and ice-fishing is a popular sport!

Remember the famous Norwegian saying: “There is no such thing as bad weather, only bad clothing” – so they dress for several hours sitting still on the ice in many degrees of frost!